DSS--Defense, Security + Sensing--is the world's largest unclassified event for defense, security, and sensing applications for industry and the environment, and we'll be there in Booth 2220 starting Tuesday April 24.

DSS relocated from Orlando to Baltimore for 2012. The move from Orlando is a good one because it will bring in more experts than ever in the fields of homeland security, defense, and environmental sensing. Here, they'll gain visibility for their work and products and receive face-to-face feedback from their peers.

DSS is a premiere event on the Headwall Photonics show schedule. New this year will be a product called Hyperspec RECON, which is a portable yet rugged hyperspectral sensor that can render a 6" x 6" target at distances of up to 1.5km. We'll have the RECON system on display and operational, so be sure to take a look!

One of the most critical applications for hyperspectral technology in the field of defense, security and sensing is aboard airborne platforms such as the ScanEagle from Insitu. We'll have an actual ScanEagle in our booth, courtesy of 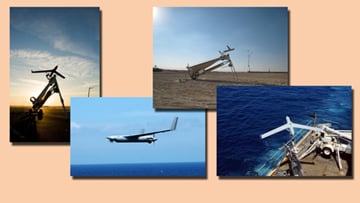 Insitu, to demonstrate how our lightweight Micro Hyperspec sensors can be deployed in packages where size, weight, and power (SWaP) need to be optimized.

We look forward to seeing you at DSS starting April 24!