The Defense, Security + Sensing (DSS) show moved from its traditional Orlando venue to Baltimore this year. Flush with technology-driven agencies, the Baltimore-Washington area is a natural magnet for a show such as DSS. 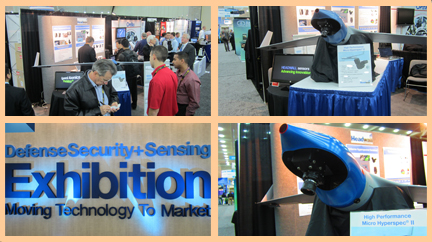 The first two days at DSS have been amazing for Headwall, with visitors drawn by the sight of the Insitu 'ScanEagle' UAV. This impressive aircraft is one example of a typical platform that can easily deploy Headwall's 'Micro Hyperspec' hyperspectral sensor. Size, weight, and power-consumption specifications (SWaP) for any payload need to be carefully balanced when it comes to deployment on any mission-critical UAV. So far during the three-day DSS show, the ability to demonstrate our lightweight sensor aboard ScanEagle is proving the point better than any photograph could!

Closer to the ground, Hyperspec RECON is drawing tremendous interest from technologists who need a portable, simple-to-use hyperspectral sensor that can be deployed on the battlefield. Hyperspec RECON can render a 6" x 6" hyperspectral scene at a distance of 1.5 km and process that image data in only a few seconds. Using a spectral library of known signatures, RECON is able to immediately identify them within the field of view. Aberration-corrected imaging technology combined with robust, fast data-processing software give our troops immediate, accurate, and actionable hyperspectral data in the field of battle.

DSS wraps up later today at the Baltimore Convention Center.