Far Away and Long Ago: Hyperspectral Imaging Plays Key Role

Scientists have forever been fascinated with space. What’s up there? Does life as we know it exist elsewhere? Is there any other celestial body like earth?  While these questions might lack solid and precise answers, it’s not for lack of trying. Knowledge often comes not from massive ‘Ah-HA!’ moments, but from smaller discoveries.  When stitched together, these jewels of learning present a useful mosaic for future scientists. 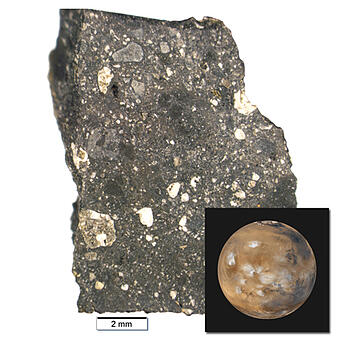 A two billion-year-old meteorite—officially named NWA 7034 but nicknamed Black Beauty by scientists—recently crashed into the Sahara desert. It was found by scientists in 2011 and determined to be of Martian origin two years later. The geologic history of Mars has always been a fertile source of exploration given the never-ending interest in this relatively nearby yet mysterious planet. While exploring the Martian landscape provides a wealth of scientific data, this meteorite has itself been a goldmine of information. Why? Because it sheds light not on the Mars of here-and-now, but on what we believe happened 2.1 billion years ago to its geologic interior and surface.

The Black Beauty meteorite was lofted off the martian surface by a large impact, an explosive geologic event. The intrinsic value of the rocks can be appreciated mostly because they carry a snapshot of what the conditions were like on Mars at the moment the impact occurred. The Mars of today is fascinating, yes, but to have a sample of Mars from 2.1 billion years ago is more fascinating still. Indeed, Black Beauty is significantly older than almost all other Martian meteorites yet found.

In early 2014, a Brown University research team led by Dr. Jack Mustard and graduate student Kevin Cannon temporarily acquired a slice of Black Beauty from Dr. Carl B. Agee, Director of the Institute of Meteoritics at New Mexico University. Brown University analysis included hyperspectral imaging using Headwall’s VNIR (380-1000nm) and SWIR (950-2500nm) sensors to extract a wealth of meaningful spectral data. "We were really presented with a one-of-a-kind specimen in Black Beauty," noted Dr. Mustard. "We wanted to learn as much as we could and add to the body of geologic knowledge already accumulated."

The team paired the two sensors in Headwall’s 'Starter Kit' configuration, which comprises a moving stage, necessary and proper illumination, and full software control to manage the collection and post-processing of the incoming data. "What we saw as we ‘unpacked’ the data is that Black Beauty is rich in information that give us a clue as to what Mars was like over two billion years ago," said Cannon. "While rovers on Mars today are extracting important new data, to have an actual sample that we can analyze with our most sophisticated instruments is exciting."

In the adjacent hyperspectral image of Black Beauty, features become clear. The mineral feldspar shows up as green, and the mineral pyroxene comes out as yellow/red. "These two minerals make up most of the Martian crust, so it's exciting that we can see them and map them out spatially in the data," said Cannon.

As a scanning technology, hyperspectral imaging is designed to ‘see the unseen’ and unlock the answers to challenging questions. There are numerous ‘imaging’ and ‘scanning’ techniques available to the scientific research community, but none possess the vast spatial and spectral information collected by Headwall’s instruments. "What we have been able to do is successfully introduce a brand-new tool into our toolbox and prove its value," said Dr. Mustard. "We saw things in the VNIR and SWIR spectral ranges that no one has seen before, and our overall body of knowledge is more expansive because of it." Hyperspectral imaging collects ALL the spatial and spectral data within the field of view, not just some of it (as is the case with multi-spectral).

And what about closer to home, here on earth? Hyperspectral imaging is becoming more mainstream and affordable so that research entities like Dr. Mustard’s group at Brown can tackle projects like these more readily than ever. Graduate student Rebecca Greenberger has done similar hyperspectral analysis on rock and geological formations that many of us drive by without glancing twice. "There’s a rock formation behind a Target store in Connecticut that is just loaded with incredible geological samples," said Greenberger. Many of those collected rock specimens have themselves been scanned with Headwall’s hyperspectral instruments, yielding spectacular results and new information about the geological history of our planet.