Niki Tsongas, Congresswoman from the 3rd Congressional District in Massachusetts, visited Headwall today to meet with Company officials and speak to employees. Ms. Tsongas applauded Headwall’s focus on technical leadership across its core markets. “I’m fascinated by all the exciting applications for your products,” Tsongas noted. “My work in Congress is aimed at strengthening the entrepreneurial spirit I see when I visit companies like Headwall.” 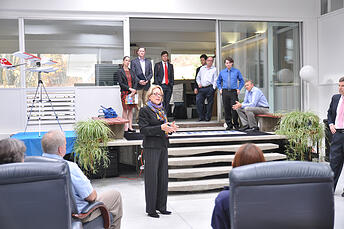 During the visit, Congresswoman Tsongas toured Headwall’s Fitchburg facility and saw firsthand how the Company’s vertically-integrated approach moves spectral imaging sensors from design to production very rapidly. The sensors, used by industry and government, collect a complete ‘spectral picture’ of whatever is within the field of view. This can be from a satellite, a manned aircraft, a small UAV, or along a high-speed inspection line where product quality can be determined by hyperspectral imaging.

During the ‘town hall’ meeting with employees, Tsongas fielded questions from employees on a range of topics, including her position on STEM education (science, technology, engineering, and mathematics). “Education in these areas represents the catalyst for companies like Headwall to flourish,” noted Tsongas. “You need people who can hit the ground running, and education is fundamental to achieving a labor force that is ready to go in very challenging areas across science and technology.”

Headwall CEO David Bannon thanked Congresswoman Tsongas for visiting Headwall. “We’re very honored to have you here today because it reinforces Washington’s support for small, entrepreneurial, technology-driven companies like ours.”

Congresswoman Tsongas was elected to the United State House of Representatives in a 2007 special election, becoming the first woman in 25 years to serve in Congress from the Commonwealth of Massachusetts. She represents the Massachusetts Third District, which had previously been known as the Fifth District until her most recent reelection in 2012. Tsongas holds the same seat that was held three decades earlier by her late husband, former Congressman, U.S. Senator and presidential candidate Paul Tsongas. The Third District spans portions of Essex, Middlesex and Worcester counties.

Tsongas serves on the House Armed Services Committee, a position she sought out when first elected. In 2013, Tsongas’ hard work led to her being named to a leadership position as the top Democrat on the Subcommittee for Oversight and Investigations. The Third District has a long history of military service, which is reflected both in the number of residents who serve in the active duty military as well as in the numerous veterans who call the Third District home.  Tsongas also represents one of the largest concentrations of defense related employers in the country that manufacture the products, develop the technology and create the jobs that keep our nation strong and our service members safe.

As a member of the Armed Services Committee, Tsongas has pushed for development of lightweight body armor and new measures to better prevent and respond to incidents of sexual assault in the military.