Wrap-up from the BiOS and Photonics West conferences in San Francisco...

After a busy week discussing spectrometers, diffraction gratings, and hyperspectral imagers at the conferences, the Headwall Photonics’ application engineering team had some free time to take hyperspectral scans of a few of San Francisco’s most famous landmarks.

Below is a hyperspectral image of the Golden Gate Bridge. The hyperspectral image was taken with Headwall’s Hyperspec RECON imaging sensor, the industry’s first handheld hyperspectral sensor specifically designed for ground-based, military & defense applications. You can see that the spectra of the anti-rust paint on the bridge supports was also found on the metal window supports of the building in the foreground. 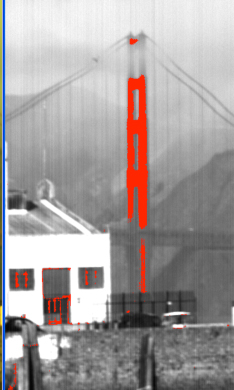 The striking thing about this image is that the bridge is estimated to be greater than 2 miles away from the sensor.

The Hyperspec RECON sensor was a PRISM Award finalist at the Photonics West Conference.  Reconnaissance soldiers will use this rugged, handheld sensor for improved ISR (intelligence, surveillance, and reconnaissance) missions.  In deployment mode, the DoD will load mission-specific target signatures into the hyperspectral sensor to detect “objects of interest” within the field of view.