Great companies can serve not only as an economic engine for customers, employees, suppliers, and business partners but also as a strong community partner based on how that company integrates itself into the communities in which it operates.

So many times, employees follow the same morning routines to get to work – a cup of coffee on the go, a 25 minute commute to work, pull into the parking lot, and do your thing every day. But picking your head up and looking at the community and the surrounding neighborhood as you go to work every day reveals a lot and helps to define where we can have a positive social impact as a company and as an individual.   This perspective helps us to understand our community’s strengths, resources, cultural diversity, as well as a heightened awareness of community need. 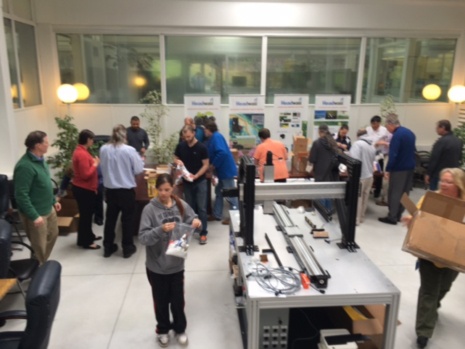 A cornerstone of strong, thriving companies is to establish a brand as a good community partner; defining a commitment to social responsibility and community philanthropy needs to be more engrained in the cultural fabric and strategies of companies.

As an element of our FY16 success plan, Headwall has undertaken a new community service initiative with our employees. A group of employees conducted site visits to a number of community service organizations. As a result, Headwall is working to support Our Father’s House, a local non-profit organization based in Fitchburg that is providing shelter and transitional services to homeless men, women, and children in the community.

Additionally, a group of five volunteers from Headwall went to a work project for Growing Places, a local organization that runs community gardens and teaches gardening classes to residents of Fitchburg and Leominster. The group met at the Growing Places warehouse in Leominster, where the first project involved power-washing three tanks to be used for storing water at the community gardens. One tank had been full of black dye, another contained glue, and a third one held corn syrup.

Everyone involved got stained with the black dye, and were ultimately unsuccessful in cleaning that tank. In the end, two tanks were cleaned and delivered to the Sundial Community Garden, and the Cleghorn Community Garden, both in Fitchburg.

The work was challenging, but much of the danger was mitigated by putting the most dangerous engineer in a cage. The two cleansed tanks were loaded into a truck and delivered to the community gardens. The first garden was surrounded by a fence that the volunteers had to lift the tank over. After both tanks had been installed at the community gardens, the group moved on to a third site, adjacent to the Cleghorn Garden, to plant two large apple trees that had wintered over but were lying on their sides.

The trees were removed from the shallow holes in which they had spent the winter, the burlap and wire baskets were removed from the root balls, and two large holes were dug. A full group effort, led by Kevin Didona, successfully placed the trees upright in their new homes. The dirt was replaced, and the community now has two lovely apple trees.

The staff at Growing Places was very pleased with all we were able to accomplish, and there will be opportunities for more cooperation between that group and Headwall Photonics in the future. We have discussed the possibility of a project at the Headwall facility where volunteers can build frames for raised beds at the community gardens.