Data Fusion: A New Capability for the Remote Sensing Community

We’re seeing a tremendous increase in the number of airborne deployments for our hyperspectral imaging sensors. To a large degree, the trend toward smaller and more affordable UAVs is giving the remote sensing community more flexibility to undertake more missions to capture meaningful environmental data. From wine-grape vineyards in northern California to coffee bean plantations in South America, the precision agriculture community is embracing packaged ‘UAS’ offerings that combine a UAV matched to the payload it needs to carry. 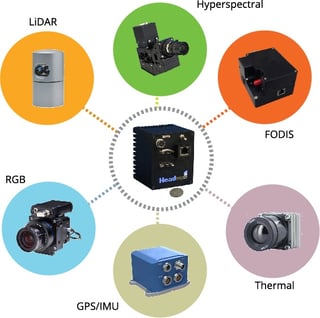 Collecting meaningful, actionable data for a precision agriculture scientist can mean the difference between a healthy harvest and a disastrous one. Depending on the wavelength, the sensors will spot indices indicative of diseases, irrigation deficits, crop stress, and more. An affordable UAV thus takes the place of much more expensive manned aircraft flights. The financial savings notwithstanding, this new system can be hand launched and retrieved and basically deployed wherever and whenever (with adherence to all local aviation rules and regulations).

One trend we’re seeing at Headwall is the integration of multiple sensors, each having their own specific streams of data. For example, the payload might comprise a VNIR (400-1000nm) sensor along with a SWIR (1000-2500nm) instrument, but might also include LiDAR and typically a GPS/IMU. A Fiber-Optic Downwelling Irradiance Sensor (FODIS) is also often used to measure and collect data relative to changes in solar illumination.

Obviously, payload restrictions determine what the craft can lift and for how long. But it is a balance between choosing an affordable UAV that is small and light while understanding that it might not be able to carry all the instruments that a remote sensing mission might demand. Optimizing Size, Weight & Power (SWaP) is the guiding principle for missions involving UAVs. There are many fixed-wing and multi-rotor UAVs on the market that all specify their payload restrictions and flight durations.

The goal of any remote sensing activity is to see the unseen, and then make sense of the data during post processing. Because this data leads to important agricultural decisions, it’s crucial to synthesize the data from each instrument. The term for this is data fusion, and Headwall has just unveiled a new product called HyperCore™ that handles this important task. As the UAV flies its mission, data streams from the hyperspectral sensors, GPS/IMU, LiDAR, and other instruments are all collected on HyperCore’s 500GB drive for easy download (via Gig-E) later. HyperCore includes the most-used connections, including two Gig-E ports, a CameraLink port, power, and two I/O ports.