"Claire" is the nickname of a mini-satellite officially named GHGSat-D that launched in June of 2016 and shortly thereafter began delivering images using its Headwall hyperspectral SWIR sensor. Claire's mission is to help industries better understand their greenhouse gas emissions, enabling them to control and ultimately reduce them. For example, Claire can help coal mine and landfill operators find significant leaks of methane, then measure those leaks to justify a business case for gas-fired electricity generation.

Claire orbits the earth approximately 15 times per day and images sites such as oil wells in Texas, oil sands in Canada, power plants in Europe, coal mines in China, and even rice paddies in Vietnam. 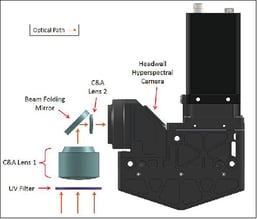 How does Claire work? Gases absorb light at specific wavelengths, creating a “spectral fingerprint” for each gas. The Headwall hyperspectral sensor inside helps to find those fingerprints by measuring the brightness of those fingerprints to determine how much of each gas is present in the field of view of the satellite. Claire measures two gas fingerprints – carbon dioxide and methane – the two most significant greenhouse gases.

Claire is expected to operate for 5 years; the satellite will burn up in the atmosphere after its mission is complete. Claire alone has sufficient capacity to measure over 1,000 sites per year; GHGSat is already sufficiently confident in Claire’s performance to have ordered two follow-on satellites, and will ultimately offer services for hundreds of thousands of industrial sites around the world.

Many GHGSat customers are motivated by the cost of GHG emissions from their industrial facilities. The World Bank reports that the Carbon Market (carbon trading, taxes, and credits) is worth over $50B today, and growing. Assigning a value to each ton of GHG emissions creates a financial motivation for industrial emitters to manage their financial risk by understanding, controlling and reducing their emissions.

GHGSat is licensed to operate Claire by the Government of Canada.