The Jobos Bay mangrove forest in Puerto Rico covered nearly 3,000 acres (12 square kilometers) before Hurricane Maria (left). The upper layers of that forest were sheared off by the storm (right), but the damage to this forest was relatively minor compared with the damage to mangroves on the eastern side of the island. Credit: Vivian Griffey

In a similar way to how LiDAR was used in the recent Headwall and geo-konzept project for the Center for Hyperspectral Remote Sensing Europe project on vegetation encroachment on infrastructure, researchers lead by Vivian Griffey, of the University of Washington in Seattle were able to measure the heights of the mangrove tree canopies before and after the hurricanes.

A critical tool that research team used was NASA Goddard’s LiDAR, Hyperspectral and Thermal Imager (G-LiHT), containing Headwall hyperspectral sensors onboard a small manned aircraft, to capture the extent of the damage. Not only could vegetation health be assessed, but the LiDAR system (a more powerful type of LiDAR than the compact Velodyne model used on Headwall's UAVs, could precisely capture a 3D point clouds of the canopies from the altitudes that the manned aircraft flew over the damaged regions. 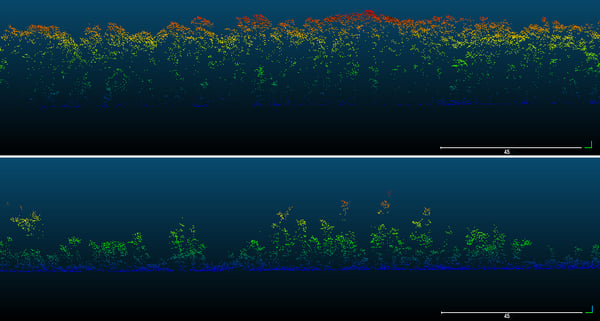 The team used lidar to measure the heights of mangrove trees before (top) and after (bottom) Hurricane Maria. These two slices come from Humacao in eastern Puerto Rico, just north of where the hurricane made landfall. Credit: Vivian Griffey

Researchers suspect that a combination of factors led to the observed difference, including Maria’s particular trajectory, the counterclockwise rotation of northern hurricanes, and Puerto Rico’s mountainous central terrain as opposed to Florida's relatively flat geomorphology.

Griffey presented her team's work at the most recent AGU Annual Meeting in San Francisco during a talk entitled "Evaluating Threshold Responses to Hurricane Wind Speeds in Mangrove Forests across Puerto Rico and Southwest Florida".