The watchful eyes of a young girl got a flag replaced over the shared facility of Headwall and the Montachusett Opportunity Council (MOC) offices on River Street in Fitchburg, MA.

Congresswoman Lori Trahan personally handed Ava Reed (pictured below with Congresswoman Trahan), daughter of MOC Executive Director Kevin Reed, a replacement flag which had previously flown over the nation’s Capitol Building. Ava had noticed the old flag was torn the prior week and insisted that it be replaced. 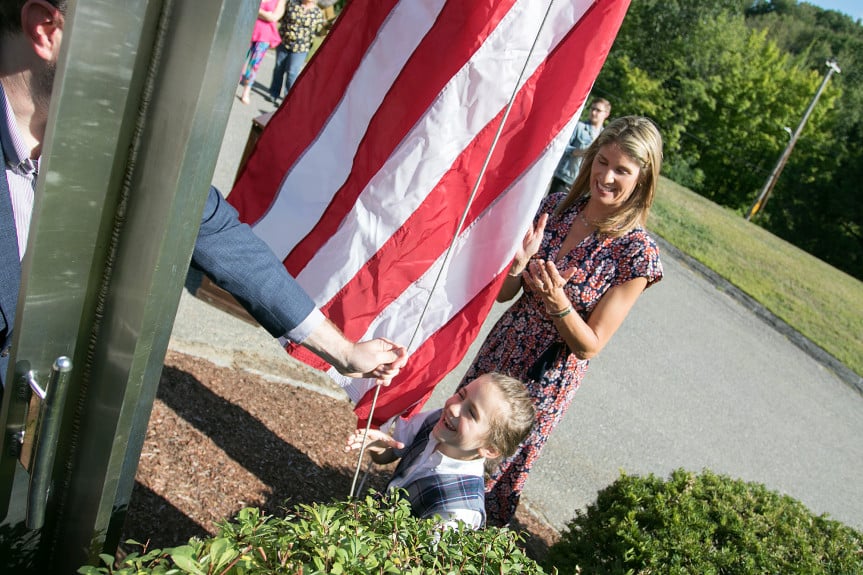 Rep. Trahan took a short tour of the building which is jointly occupied by Headwall Photonics and the MOC, and said she was excited to learn about the partnership between the council and Headwall.

Space in the Fitchburg building opened up when Headwall moved administrative and some production resources to the newer Bolton facility. Cleanroom assembly and some optical testing continues to be performed in Fitchburg.

“This is a remarkable partnership,” said Rep. Trahan. “We see great corporate citizens in Headwell forging a great relationship with MOC.”

“It’s nice to know there are private citizens downstairs and we’re up here changing the world in our own way,” said Kevin Reed.

Reed said these programs are critical to this area because they provide opportunities for residents who might not otherwise have them.

“MOC deals with issues that are really important for the people in need that I have in the city,” said DiNatale.

“These are services that members of the community rely on,” said Rep. Trahan.