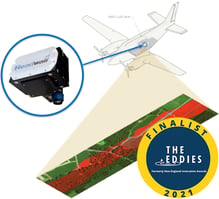 Headwall's Solar-Induced Fluorescence (SIF) imaging sensor is a finalist for one of The Eddies, formerly the New England Innovation Awards. The weak SIF signal from green plants can be separated from daylight by the exceptionally high spectral resolution of this application-specific imaging sensor. While other non-imaging sensors are used for point-measurements in the laboratory or in the field, the Headwall SIF imaging sensor allows high spatial resolution hyperspectral acquisition of the SIF signal from photosynthesis, as well. Researchers can analyze the SIF signal to help better determine plant health/stress before symptoms manifest themselves to the naked eye.

Photosynthesis is a key process to plant health, crop production, and the atmospheric CO2 reduction/carbon cycle. Measurement of photosynthesis in real-time is critical to understanding factors/mechanisms that are beneficial or harmful. Here is an informative and entertaining YouTube video (not affiliated with Headwall) explaining the SIF phenomena.

Customers using Headwall SIF imaging systems are part of a growing number of researchers performing these measurements across the globe from ground-based instruments, from environmental monitoring towers, from aircraft, and from space. With the coming launch of the ESA FLEX satellite mission, airborne and terrestrial SIF imaging sensors are anticipated to provide valuable and timely high-resolution ground-truth data.

Robert J. Crowley's brain child, the New England Innovation Award competition was first launched in 1986, and since then, hundreds of companies have partaken in the competition, which was a couple of hours long when it started. Some notable mentions include Ben & Jerry's Ice Cream, Staples, Genzyme, MassChallenge, Carbonite, KRONOS, ZipCar, iRobot, zipcar, Keurig and Vistaprint.

The competition has since been rebranded as The Eddies. The Eddies name represents: a nod to Thomas Edison, and his prolific work (and 1,093 innovation patents!) in a variety of industries and sectors; and the circular movement of water, counter to a main current, causing a small whirlpool on the surface of the ocean (similar to the ripples caused to any market by the introduction of a ground-breaking product or technology).