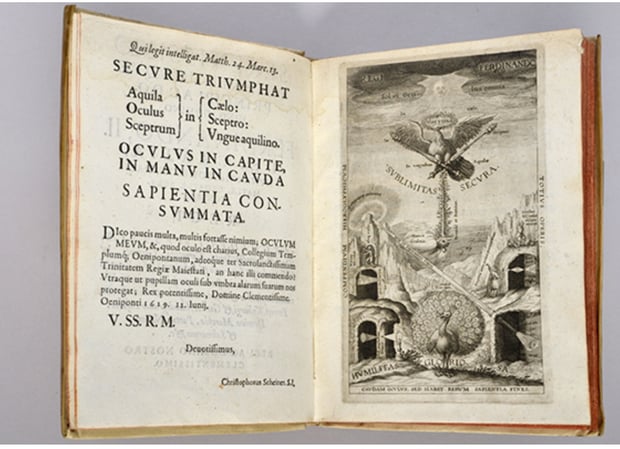 David Walter Corson is curator of the History of Science collection at the Cornell University Library. Through years of study and procurement, the Cornell collection...35,000 volumes in all...has some esteemed and cherished works written by Sir Isaac Newton, and others, and represents the world’s most extensive university collection on the evolution of scientific thought and research over the few centuries.

One of the books in this vast collection at Cornell was simply known as the ‘Oculus,' written by Christopher Scheiner in 1619. Scheiner was a brilliant geometer, physicist and astronomer, who developed theories of optics which later formed the basis for the development of lenses. Schiener’s book showed that the retina is the seat of vision, and it was a recognized treasure that Cornell was very pleased to have acquired in 1999 from Jonathan Hill, the preeminent New York-based bookseller of rare books and manuscripts. However, it was five years later that the Scheiner Book was reported to have been stolen from the National Library of Sweden, along with around 55 other notable works worth millions.

Unbeknownst to Jonathan Hill or to David Corson, the Library of Sweden theft was a daring one carried out by an employee of the National Library by the name of Anders Burius.  Burius sold the works he stole between the years 1995 and 2004 to German auction house Ketterer Kunst. Burius was subsequently arrested and confessed in 2004. However, while free on bail in Sweden, Mr. Burius attempted suicide by slitting his wrists and then cutting the gas line in his apartment. The explosion finished the deed, flattening the building and injuring scores of neighbors.

The story is widely known throughout Sweden and is recounted in The History Blog, http://www.thehistoryblog.com/archives/17824.

And, yes, it is also the subject of television mini-series.

Where do Headwall’s hyperspectral imaging sensors fit in?

Initially, Headwall’s spectral imaging analysis was focused on the examination of spectral enhancement techniques on Cornell’s extensive collection of Lincoln documents such as the Gettysburg Address, the Emancipation Proclamation, the 13th Amendment to the US Constitution, Lincoln Executive Mansion Letters, and others.

Studying historically significant treasures like Cornell’s Lincoln Collection must be done with great care. The Hippocratic oath for physicians (and, by extension, to curators and conservators) somewhat loosely states, 'First Do No Harm.' Indeed, any sort of spectral imaging must not involve harsh lighting, heat or be otherwise 'invasive.' Assured that it was a safe form of scientific analysis, Cornell teamed with Headwall to carefully image some artifacts, art work, and rare books that can be truly described as priceless treasures of cultural heritage.

Now back to Scheiner’s Oculus book … As Sweden worked with Interpol to track down these stolen treasures, David Corson of Cornell became aware of the book theft and began working with the FBI to determine if the Cornell version of Scheiner’s Oculus was in fact stolen from the National Library of Sweden.

To make a forensic determination, some scientific analysis was necessary which led to Headwall's expertise in hyperspectral imaging and the use of Headwall’s Hyperspec VNIR and SWIR sensors to analyze the book. Headwall’s non-invasive hyperspectral imaging technique yielded a highly resolved spectral and spatial datacube that allowed application engineers to analyze component and constituent material differences in the book such as color change, deterioration, and alterations, as well as the ability to identify disguised text and “under drawings” not visible to the naked eye. 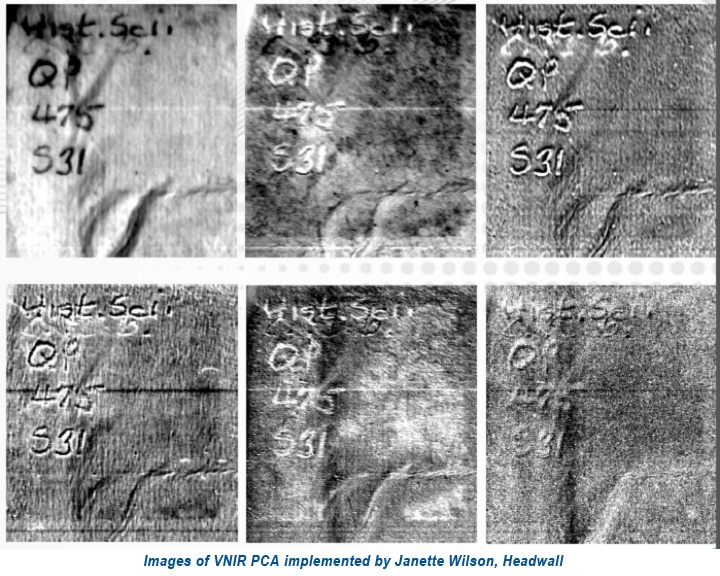 "Your analytic techniques were exactly what we needed," explained Corson. "The totality of the circumstantial evidence that emerged from Headwall's study of The Scheiner Book is, indeed, what ultimately convinced us to 'repatriate' the volume." Through the use of data collected by Headwall’s VNIR and SWIR hyperspectral sensors, Janette Wilson of Headwall’s technical sales team undertook a rigorous PCA approach (Principal Component Analysis) that was able to yield definitive proof that faint, non-visible markings on the book were correlated to the National Library of Sweden’s catalogue system.

"We had independently asked the National Library of Sweden whether there were any unique bookplates or similar identification devices that the library might have used in the past that we should look for," recalled Corson. But there was no apparent evidence of previous bookplates in Cornell's acquired copy, aside from the one Cornell added themselves. But spectral imaging revealed remnants in the corner sections of the front pastedown (a reasonable location for a bookplate) of a previous label. Corson thus had his first bit of evidence: "This finding showed measured dimensions almost identical to those of a bookplate the National Library had told us was once used in their books!"

The challenge before Corson was compounded by the fact that the National Library could not accurately corroborate any of these findings after it was determined that all of its records had been destroyed. "The effect was as if the Library had never even had the titles in its holdings," recalled Corson. In any case, The National Library did send Corson two possible shelf marks for the Scheiner volume, based on their best recollection.  Hyperspectral imaging thus revealed that the sequence of 'marks’ were the same as those provided by the National Library.

In the end, hyperspectral imaging did indeed prove instrumental in uncovering findings previously unknown. “What is significant is that Headwall’s technique and approach can reveal definitive evidence in situations like these,” noted Corson. The technology readily adapts itself for use with paintings, maps, manuscripts, even non-flat artifacts.