The Spirit of Giving at Headwall

The corporate environment is always a bustling one: Getting and shipping orders, building sensors, designing new products, and maneuvering through a seemingly endless stream of meetings. But at Headwall, we take the opportunity to ‘give back’ to several central Massachusetts communities with families in need. This can range from assembling ‘personal care kits’ to cleaning and beautifying neighborhoods. This happens several times during the year, and is a part of Headwall's ongoing pledge to donate and contribute wherever possible to those less fortunate.

Today, Headwall employees gathered all the fixings for full Thanksgiving dinners to be distributed to dozens of area families during the upcoming week. This was done in coordination with ‘Our Father’s House, Inc. of Fitchburg, Massachusetts, which is a nonprofit focused on assisting the homeless in Northern Worcester County. Everything from the turkey and stuffing right down to the baking pan was included and boxed, before being carefully loaded aboard a truck at Headwall’s facility. 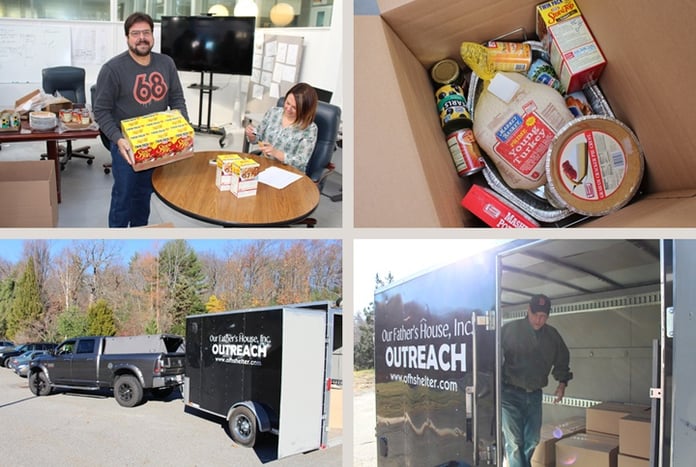 “This is something we take a tremendous amount of pride in doing,” said Robin Jacobs of Headwall. “We have partnered with Our Father’s House consistently and we know our help and assistance is so appreciated.” In addition to the turkey dinners and personal accessory kits, Headwall had a company ‘coat drive’ so that as many homeless people as possible could have warm outerwear before the winter chill sets in. "Our entire employee base rallies around these projects whenever they arise," said Robin. "It's a collective sense of joy to be involved with charitable work like this, and our relationship with Our Father's House is a very rewarding one."

“I can’t express enough how grateful we are to Headwall for their continued assistance,” said Kevin MacLean, Director of Homeless Services at Our Father’s House. His organization has evolved into much more than just a shelter for the homeless and now offers comprehensive case management. Our Father's House works with other local agencies to make sure that the needs of the homeless are dealt with proactively rather than reactively. “That’s why our partnership with Headwall is so valued,” said Kevin. “There are families and individuals who will now have a nourishing meal on Thanksgiving and warm coats for the winter.”