Hannover, Germany, Nov. 12, 2019 -- Headwall BVBA, Belgium and geo-konzept of Germany announced at Agritechnica 2019 the formation of a Center for Hyperspectral Remote Sensing Europe (CHRSE). Agritechnica is the world’s largest trade fair for agricultural technology and geo-konzept is an Agritechnica exhibitor at Hall 15 / Stand J20.

“Headwall focuses on providing UAV-based solutions for critical agriculture applications ranging from plant phenotyping to early detection of crop disease. We have established a broad portfolio of hyperspectral and multispectral sensor solutions purpose built for harsh environments,” said Christian Felsheim, Headwall’s European Area Business Director. “Our partner geo-konzept has accumulated great experience bringing multi-modal sensing technology into demanding applications in the field. Researchers and customers will find that this new Center for Hyperspectral Remote Sensing Europe will be a great place to develop application-relevant solutions for their needs.”

“We have a history as an independent authority on applications and technology solutions. Participating in the establishment of this Center for Hyperspectral Remote Sensing Europe is a unique opportunity to support our customers, who will benefit from powerful new hyperspectral imaging tools, and our realworld experience in a variety of applications in the field,” said geo-konzept founder Thomas Muhr. “We eagerly anticipate working with Headwall as both a customer of their award-winning products and a now a partner for educating and expanding the market for nimble airborne hyperspectral solutions.”

Headwall is a leading designer and manufacturer of complete spectral instrumentation solutions for remote sensing, advanced machine vision, and government/defense markets. With a worldwide base of end-user and OEM customers, Headwall enjoys a market leadership position through the design and manufacture of spectral solutions that are customized for application-specific performance. The Company has three European locations in Belgium, Germany, and Italy. European headquarters operations at Headwall BVBA are located near Brussels, Belgium. For more information, visit www.headwallphotonics.com

Since 1992 geo-konzept GmbH stands for reliable and robust GPS and GIS technologies for agriculture and forestry. The company is one of the market leaders in the field of high-precision and GPS-supported agriculture. Particular emphasis is placed on steering, sensor and management systems. Further business fields are laser-supported and high-precision 2D and 3D measurements, e.g. for architects or blasting companies. Mobile GIS and remote sensing (aerial photography and analysis) also play an important role in the company. Services as well as our own hardware and software development complete the picture of geo-konzept as a company for environmental planning systems. For more information, visit geo-konzept.de

Link to PDF of Press Release 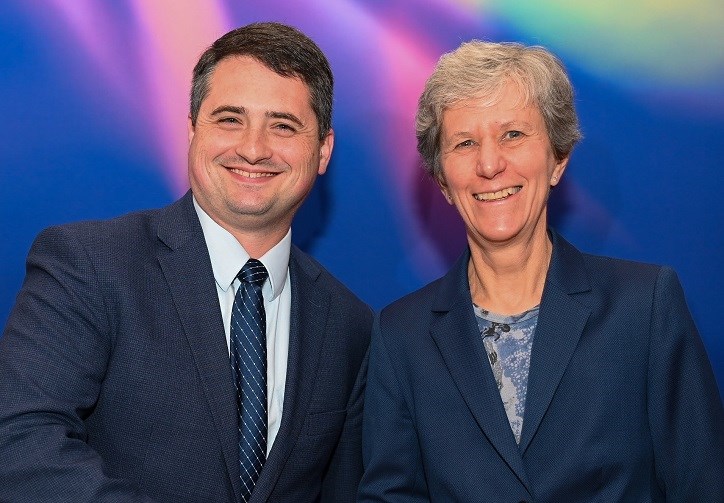 As described in the award, the Headwall Special Projects Team is recognized for “the successful development of a compact, rugged, and lightweight imaging spectrometer, optimized for cost-effective airborne retrieval of chlorophyll fluorescence emission signatures monitoring plant health in near-real-time at simultaneously high spectral and spatial resolutions.”

OSA President Ursula Gibson said during the award ceremony in Washington, DC, “OSA is proud to honor the teamwork and innovation that created this new technology to improve the way we monitor the health of our planet’s ecosystems and global agriculture.”

The ability to take direct measurements of SIF can be used as an indicator of plant stress and crop health. It can also be used to provide more accurate estimates of species composition, seasonal variations, and physiological status.

Headwall also announced that the monetary portion of the award will be donated to a local high school Science, Technology, Engineering & Math (STEM) program and to a deserving student at Brown University.

This year marks the 30th anniversary of the Paul F. Forman Team Engineering Excellence Award, which was established by OSA in 1989 and in 2007 was named in remembrance of Paul F. Forman, who helped raise visibility for the field of optical engineering. The team award recognizes technical achievements such as product engineering, process, software and patent development, as well as contributions to society such as engineering education, publication and management, and public appreciation of optical engineering.

Headwall Photonics is a leading designer and manufacturer of spectral instrumentation for remote sensing, advanced machine vision, and government/defense markets. With a worldwide base of end-user and OEM customers, Headwall enjoys a market leadership position through the design and manufacture of spectral solutions that are customized for application-specific performance. The Company is based in Massachusetts where it has two locations (Bolton and Fitchburg). European operations (Headwall BVBA) are located near Brussels, Belgium.

About The Optical Society

Founded in 1916, The Optical Society (OSA) is the leading professional organization for scientists, engineers, students and business leaders who fuel discoveries, shape real-life applications and accelerate achievements in the science of light. Through world-renowned publications, meetings and membership initiatives, OSA provides quality research, inspired interactions and dedicated resources for its extensive global network of optics and photonics experts. For more information, visit osa.org.