Headwall Enhances Business Operations in Europe with a Director-Level Position

Bolton, MA – April 13, 2020 – Headwall Photonics, a world leader in hyperspectral imaging platforms and instrumentation, announced today that Christian Felsheim has been promoted to the position of Director Headwall Photonics Europe.

He joined the Headwall sales team as Business Development and OEM Account Manager for the European region in 2018 with a focus on expanding sales and solidifying customer relationships across the region. Since then, Christian has been the driving force behind the recent successful introduction of the MV.X Advanced Machine Vision camera and its simplified integration protocols that help transform Headwall’s powerful technology into intuitive solutions that directly provide actionable data.

“I see tremendous potential for business growth in Europe,” says Christian. “Customers across a wide range of markets look at hyperspectral imaging solutions as a significant step up from conventional color and multispectral methods. Headwall has those solutions today for both research applications and production deployment.”

“Christian has contributed an enormous amount to our business activity in Europe,” says Don Battistoni, Headwall Vice President, Sales & Marketing. “In addition, he has helped spearhead initiatives such as the Center for Hyperspectral Remote Sensing Europe (CHRSE) and our new MV.X advanced machine vision product line with onboard hyperspectral data processing in real time. I sincerely appreciate Christian’s experienced market insights and look forward to working with him to continue expanding Headwall’s business in Europe.”

Christian Felsheim previously served as Head of OEM Sales at Andor Technology, extending the company’s reach into the life science and machine vision markets, and was Vice President Sales, EMEA at JAI A/S, a manufacturer of area and linescan cameras for machine vision applications such as food sorting and intelligent traffic systems (ITS). He holds a Diplom in Neurobiology and Computer Science from the University of Tübingen, and a Business Administration and Management certificate from ILM.

About Headwall
Headwall is a leading designer and manufacturer of complete spectral instrumentation solutions for remote sensing, advanced machine vision, and government/defense markets. With a worldwide base of end-user and OEM customers, Headwall enjoys a market leadership position through the design and manufacture of spectral solutions that are customized for application-specific performance. The US-headquartered company has three European locations in Belgium, Germany, and Italy. European headquarters operations at Headwall BVBA are located near Brussels, Belgium. For more information, visit www.headwallphotonics.com 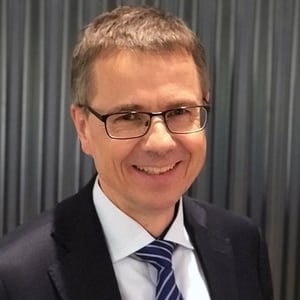 “I look forward to working with my colleague, Francesco Beccari, European Sales Manager, to greatly expand Headwall’s presence in Europe and to help customers solve the issues they face,” said Felsheim.

“Headwall has the perfect combination of unique and powerful technology, world-class manufacturing, and experts who are up to the challenge of designing and implementing solutions for customers across our core markets of advanced machine vision, remote sensing, medical-biotech, and defense.”

Christian brings scientific and industrial imaging experience, having previously served as Department Head at Hortmann AG and Sensomotoric Instruments where he launched eye-tracking technology for a variety of diagnostics, and as Sales Manager for Sensovation, a leading manufacturer of deep-cooled scientific cameras for endoscopy and OEM customers in Europe and the US.

Christian also served as Head of OEM Sales at Andor Technology, extending the company’s reach into the life science and machine vision markets, and later joined JAI A/S, a manufacturer of area and linescan cameras for machine vision, food sorting, and intelligent traffic systems (ITS) as VP Sales EMEA.

About Headwall
Headwall Photonics is a leading designer and manufacturer of spectral instrumentation for remote sensing, advanced machine vision, medical/biotech, and government/defense markets. With a worldwide base of end-user and OEM customers, Headwall enjoys a market leadership position through the design and manufacture of spectral solutions that are customized for application-specific performance. The Company is based in Massachusetts where it has two locations (Bolton and Fitchburg). European operations (Headwall BVBA) are located near Brussels, Belgium. www.headwallphotonics.com

Fitchburg, MA, March 8, 2016 — A European Union medical consortium has successfully deployed advanced hyperspectral imaging technology from Headwall in a brain cancer surgical trial that allows doctors to easily visualize the presence of hard to detect cancer tissue in the brain.  Hyperspectral imaging presents an advanced, highly resolved view of brain tissue, allowing doctors to very accurately discriminate between healthy and cancerous tissue in a non-invasive manner based on the chemical composition of the tissue. 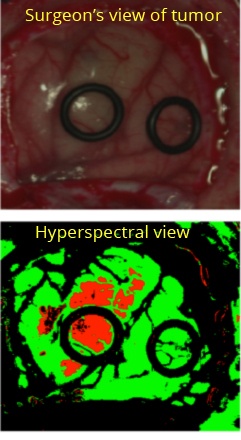 “We are very excited about the success we have achieved thus far using Headwall’s Hyperspec instruments,” said Dr. Gustavo Marrero Callico, HELICoiD Program Manager and Associate Professor at University of Las Palmas de Gran Canaria.  “Distinguishing between normal and cancerous brain tissue is very difficult, which meant looking at new imaging techniques that could resolve those differences with a high degree of specificity. Headwall delivered exceptional spectral imaging technology and provided a solid basis for project collaboration and dialogue.”

Acquiring the valuable spectral data for the HELICoiD team were sensors operating in both the visible & near infrared spectral regions. “This Hyperspec® technology is extremely useful in demarcation of the specific tumor margins for surgical resection,” said Headwall CEO David Bannon. “It also results in a much more positive outcome for the patient as the neurosurgeon now has a visual spectral imaging technique for safely minimizing the amount of tissue to remove. Headwall is very pleased to be at the forefront of a medical program that took our technology and delivered astounding results.”

Additional integration work is underway now to move this technology forward and into additional trials worldwide.

Fitchburg, MA, October 30, 2013 — Headwall has announced a new distributor partnership with Diessechem srl, with offices in Milan, Italy. The agreement between the two companies is effective immediately and forges a distribution relationship in Italy for Headwall’s award-winning Hyperspec® line of hyperspectral sensors and Raman imagers. Mr. Francesco Beccari, Product Manager for Diessechem, has extensive experience in spectral imaging and will be handling sales, support, training and deployment on behalf of Headwall. 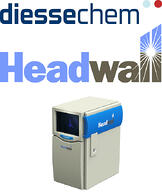 In announcing the appointment, Headwall CEO David Bannon remarked on the depth of spectral imaging knowledge at Diessechem. “From pharmaceuticals to food processing, to remote sensing, Diesschem is uniquely able to fulfill rising demand for Headwall’s spectral imaging instruments and custom spectrometers as well as provide the critical training and engineering assistance vital to every successful deployment.”

Diessechem, operating since 1993, will be managing Headwall’s hyperspectral and Raman imagers through its Diesseinstrument unit. Since the Company handles other complementary imaging technologies, Diessechem is able to provide end-to-end, application-specific solutions built around Headwall’s range of sensors. Mr. Beccari noted that Headwall’s hyperspectral sensors fit Diessechem perfectly: “Spectral imaging is much more than simply a catalog of products,” he noted. “Our ability to now offer Headwall’s industry-leading hyperspectral imagers across all our markets represents a very important advancement for our clients across Italy.”

Hyperspectral imaging can quickly and non-destructively image objects within the field of view to determine its chemical and spectral fingerprint. Headwall’s sensors take advantage of reflective diffractive optics, which use aberration-corrected gratings to deliver high performance with respect to high spatial and spectral resolution, high signal-to-noise performance, and a wide field of view. Remote sensing using small and light sensors mounted to small aerial platforms and manned aircraft is a fast-growing application area that Headwall has pioneered. Other application areas include advanced machine vision, pharmaceuticals, biotechnology, and mining & mineral exploration.

Headwall Photonics is a leading designer and manufacturer of hyperspectral imaging spectrometers and spectral instrumentation for industrial, commercial, and government markets. Headwall’s high performance instruments have been selected by end-user corporations, OEMs, and universities around the world. Headwall enjoys a market leadership position through the design and manufacture of spectral instrumentation that is customized for application-specific performance.

DIESSECHEM srl is the leading supplier of diagnostic kits for laboratory analysis and food safety, and of NIR spectrophotometers, spectroradiometers, ultra-portable Raman imagers. DIESSECHEM is divided into two product lines (Diessefood and Diesseinstrument) operating in synergy through a sales network of employees and commercial agents throughout Italy. DIESSECHEM also provides technical support from Milan (for northern and central Italy) and Rome (for Central and Southern Italy) to meet the demands for post-sale assistance.

Fitchburg, MA, August 15, 2013 — Responding to significant business growth across Europe, Headwall Photonics is pleased to announce that it has named Bonsai Advanced Technologies to be its distributor of record for both France and Switzerland. The agreement was effective July 1, 2013. Principal contact at Bonsai is Mr. Eric Bécourt, with regional headquarters in southern France. 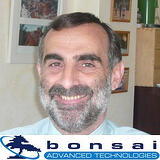 In announcing the appointment, Headwall European Sales Manager Kevin Lynch noted Bonsai’s high degree of experience in spectral imaging and, in particular, remote sensing and industrial inspection. “We are very impressed with the level of technical understanding at Bonsai with respect to our market-leading hyperspectral sensors. They will be able to effectively demonstrate and differentiate our technology to their broad base of accounts all across France and Switzerland.”

Headwall’s award-winning family of Hyperspec® sensors are used in applications ranging from ground-based and handheld all the way up to aircraft and earth-orbiting satellites. Hyperspectral imaging represents a required tool for the scientific research community, which can quickly and non-destructively image anything within the field of view to determine its chemical and spectral fingerprint. Headwall’s sensors take advantage of diffractive optics, which use aberration-corrected gratings to deliver high performance with respect to high spatial and spectral resolution, high signal-to-noise, and a wide field of view. Remote sensing using small and light sensors mounted to hand-launched UAVs is a fast-growing application area that Headwall has pioneered. Other application areas include advanced machine vision, pharmaceuticals, biotechnology, and mining & mineral exploration.

Mr. Bécourt has 23 years of experience in the analytical business, especially in the spectroscopic and NIR markets. He remarked on Headwall’s innovation and technical leadership: “Our customers in France and Switzerland embrace innovation and technology just as Headwall does,” he said. “They understand that hyperspectral imaging represents a valuable tool for their scientific research efforts and will be very pleased to know that we can bring those solutions to them.”

Bonsai Advanced Technologies focuses on critical application environments such as remote sensing, machine vision, and laboratory research. The Company has extensive deployment expertise and specializes in analytical instrumentation, biosciences, and high- and ultra-high vacuum technologies. For Headwall, Bonsai will specialize in the sale, distribution and service of spectroscopy solutions throughout France and Switzerland.