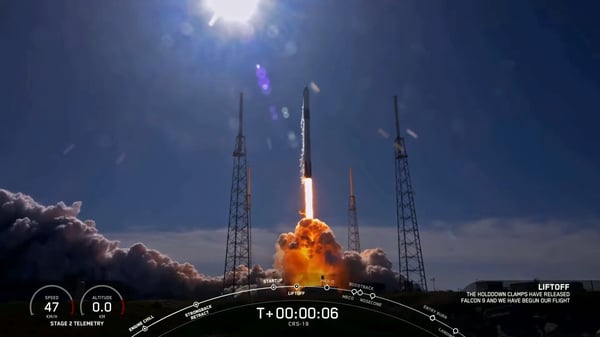 5…4…3…2…1 Lift-Off! From Kennedy Space Center in Florida, Headwall announced that its High-Efficiency Hyperspec Sensor System was launched into space for a multi-year, earth-monitoring research mission aboard the International Space Station. The mission known by the name of HISUI (Hyperspectral Imager SUIte) within the earth-observation community supports research being conducted by Japan Space Systems, a leading space exploration organization in Japan.

The Headwall sensor payload consists of two custom, highperformance imaging spectrometers. The High-Efficiency Hyperspec VNIR covers the spectral range from 400nm to 1000nm and the High- Efficiency Hyperspec SWIR covers the spectral range of 900nm to 2500nm. Together they deliver 185 spectral bands over a 20 km swath with 20 x 30 meter spatial resolution. HISUI itself consists of the imaging portion installed in the Exposed Facility (EF) and a mission data recorder installed in the Pressurized Module (PM) of the Japan Experiment Module (JEM) for a three-year mission life.

“Headwall has a successful legacy of developing products for space programs and this is an important differentiator for our engineering team” stated David Bannon, President & CEO of Headwall. “With a strategic focus on the new space economy, Headwall has been able to utilize our COTS (commercial-off-the-shelf) hyperspectral sensor technology at much lower price points than are available through traditional space contractors – all without sacrificing imaging performance. This strategy has enabled the cost-effective development of small satellite and CubeSat constellations with the additional benefit of reducing technical risk, budget risk, and schedule risk.”

Headwall has developed a portfolio of spaceborne hyperspectral imaging spectrometers for a range of applications ranging from earth monitoring to greenhouse gas detection. The Headwall hyperspectral sensor payload was launched on a SpaceX Falcon 9 from Kennedy Space Center in Florida at 12:29pm EST / 17:29 GMT-UTC on December 5, 2019. The Headwall team viewed the launch from the Kennedy Space Center observatory along with representatives from the Japan Ministry of Economy, Trade, and Industry (METI) and senior management from Japan Space Systems.

Headwall is a leading designer and manufacturer of spectral instrumentation for remote sensing, advanced machine vision, and government/defense markets. With a worldwide base of end-user and OEM customers, Headwall enjoys a market leadership position through the design and manufacture of spectral solutions that are customized for critical, application-specific performance. The Company is based in Massachusetts where it has two locations (Bolton and Fitchburg). Headwall’s European operations (Headwall BVBA) are located near Brussels, Belgium. For more information, visit www.headwallphotonics.com