Nano-Hyperspec...in the air and on the ground

Next week during Photonics West we’ll be demonstrating our very newest hyperspectral sensor: Nano-Hyperspec. We gave it that name because it’s small...exceptionally small. Think of a Rubik's Cube and you've got it. The market said it needed a robust, aberration-corrected hyperspectral sensor purpose-built for small, hand-launched UAVs. One perfect example is the X6 from the Aibotix division of Leica-Geosystems, a company with whom Headwall signed an agreement in late 2014. “There’s a confluence within the remote sensing marketplace,” said Headwall CEO David Bannon. “The attractiveness of affordable, easy to launch UAVs runs headlong into the need for perfectly matched sensor instruments that they can carry.” In conceiving Nano-Hyperspec, Headwall consolidated and integrated as much as possible to yield a small, performance-packed unit that even the smallest UAVs could easily carry.

“Ordinarily, a hyperspectral sensor talks to a separate computer in order to transfer large amounts of image data quickly,” noted Bannon. “But small UAVs don’t have the payload capacity to carry a separate data-processing unit and the cables they require.” So the first order of business was to put the data processing and storage technology into the sensor itself, which frees up space for other accessories. For proper image-data collection from a UAV, the hyperspectral sensor needs to work along with a GPS. Nano-Hyperspec was designed so that the GPS can attach directly to the housing, further saving weight and space. “Integrating these normally disparate pieces into an integrated whole is what the market continually tells us it needs,” noted Bannon. “All of this not only makes for a lightweight sensor package, but also allows for the addition of technology such as LiDAR, which itself is collecting valuable data for scientists to use.”

Nano-Hyperspec focuses on the Visible and Near-Infrared spectral range (often referred to as ‘VNIR’) of 400-1000nm. “Much of what needs to be seen from a UAV is taken at slow speeds and low altitudes,” said Bannon. This can be precision agriculture, environmental monitoring, minerals and geology, or any of a number of other uses. But to a large degree, what becomes visible to a hyperspectral sensor between 400 and 1000nm can include the presence of disease conditions on a tree canopy where it otherwise might be invisible from below. “Entire economies depend on agriculture,” said Bannon. “If a low-flying UAV with our specially-tuned hyperspectral sensor can ‘see’ an invasive disease, our technology becomes vital rather than simply desired.”

One of the hallmarks of all Headwall sensor designs is aberration-correction. In simple terms, this means making sure that the sensor sees as crisply and clearly off to the edges of its field of view is as it does straight beneath the line of flight. The holographic diffraction grating embedded within each sensor is designed to make this so, by eliminating unwanted artifacts such as ‘keystone’ and ‘smile’ that are more pronounced off to the edges of the field of view. “In practical terms, it means that the sensor has a very wide field of view that is accurately represented,” said Bannon. A wider view means a more efficient flight path. In short, the UAV can cover more ground because it can accurately ‘see’ more ground. This is particularly crucial because UAVs are battery-powered; the objective is to maximize useful work in the limited time aloft. A wide view of the ground at exceptionally high spatial and spectral resolution allows this to be so. 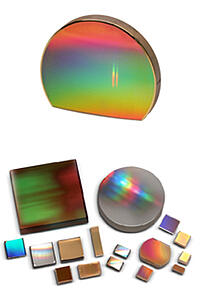 It has been said that people buy holes, not drills. They basically have a problem that needs an answer. How they get their hole or derive their answer is an exercise in technology, economics, and speed. “We have a technical solution that is affordably priced,” said Bannon. The partnership with Leica-Geosystems helps. “Time-to-deploy is an exercise in economics and lost opportunity because real value can be derived the sooner the UAV/hyperspectral package is airborne and collecting useful data.”

Not lost on the remote-sensing community is this: many applications involve taking image data from the ground rather than from a UAV. Nano-Hyperspec is easily attached to a tripod and a rotational stage so that the necessary movement (which ordinarily would come from a UAV) instead happens from a ‘stationary’ platform. These deployments are sometimes called ‘point-and-stare’ or ‘pan-and-tilt,’ and it represents a means of accomplishing movement-based hyperspectral imaging on the ground.

Headwall's booth at Photonics West (Moscone Convention Center, San Francisco) is 2506. Hope to see you there!